European Court of Human Rights finds Croatia responsible for the deaths and injuries of persons it deprived of liberty! 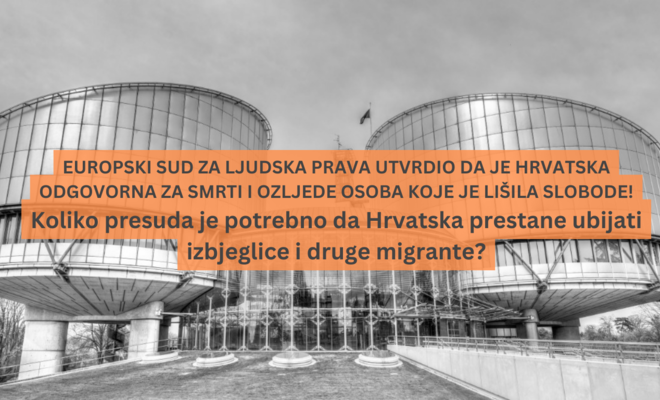 Yesterday, the European Court of Human Rights (ECtHR) delivered a second judgment finding that Croatia is violating human rights of refugees and other migrants. It brought a tiny fragment of justice to the three deceased persons and the seriously injured Abdejalil Daraibou, who were at the time in the police station and under the authority of the border police, and whose right to life Croatia violated.

In the case of Daraibou v. Croatia, the European Court of Human Rights found a grave violation of the right to life as a result of a fire outbreak in Bajakovo Border Police Station in 2015, causing serious injuries to a young Moroccan and the death of three of his friends, as well as the failure to take measures to protect the lives of these people.

Once again, the Court found that Croatia is not conducting effective investigations. Thus, this judgment also found a procedural violation of the right to life due to an ineffective investigation, that is, due to the failure of the Croatian authorities to assess the shortcomings that led to the incident, to correct them and to prevent similar life-threatening conduct in the future.

Judges reached a unanimous decision in the proceedings in which the Moroccan national Abdeljalil Daraibou is represented by the lawyer Lidija Horvat in cooperation with Centre for Peace Studies.

For the second time, the European Court of Human Rights has in this way joined the numerous reports, evidence and testimonies referring to violations of the human rights of refugees and other migrants, for which the Ministry of the Interior is primarily responsible. What is alarming is particularly the level of brutality of the violation both judgments found, of one of the most basic rights – the one to life. This judgment, just like the previous one in the case of little Madina Hussiny and her family, confirms what Centre for Peace Studies has been warning about for years: investigations into crimes committed against refugees and other migrants are ineffective, as demonstrated by the systematic nature of violations of human rights of refugees and others migrants, where several institutions that should be protecting the rule of law and human rights – are simply not doing their job.

One of these institutions is certainly the police themselves, whose duty is precisely to protect people and their lives and to act in accordance with the law. What is apparent from both judgments of the ECtHR is that the police, even after the deaths and injuries of people, and after their rights were gravely violated while they were in the hands of the police, did not take steps to subsequently provide these persons with protection and security. On the contrary, it is evident from the above cases that the actions of the competent institutions were aimed at deterring the said persons from exercising their rights, putting them in situations that made it impossible for them to stay in Croatia and denying them access to the asylum system and access to remedies they could use to protect their rights.

In fact, two years after the fatal accident, Croatia not only did not grant international protection to the young Moroccan, who survived by sheer luck, but also declared him a security threat to Croatia without any explanation, so in 2018 he was deported to Morocco and banned from entering Croatia for five years.

And while the Government boasts about entering the Schengen area, there are more and more judgments proving that it is not capable of protecting lives at our borders – now Schengen's external borders. It suffices to read the two mentioned judgments of the ECtHR to see how the Croatian police operates at its borders, if already thousands of testimonies, reports, footage and medical documentation are constantly being ignored.

In this case, the Court stated that one of the failures that led to the violation of the right to life was the failure of institutions to prevent similar mistakes in the future. We would like to reiterate that two years ago, Centre for Peace Studies called for an immediate dismissal of those who bear command and political responsibility, but the Prime Minister refused to do so. So today, following the new judgment, we can only ask: “Prime Minister Plenković, why are you not willing to prevent violations of the right to life in the future? Will anyone be held accountable for the deaths for which Croatia is responsible?”