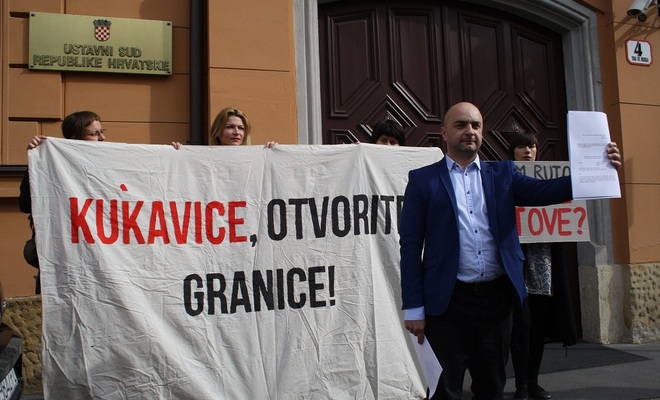 The Centre for Peace Studies (CPS) on Wednesday filed a complaint with the Constitutional Court asking it to assess the constitutionality of amendments to the Defence and State Border Control Acts which make it possible for the army to help police protect the state border in the current migrant crisis.

The CPS wants the Constitutional Court to put the amended laws out of force until a final decision is made because it believes that the new legislation could have serious, irreparable consequences.

CPS representative Gordan Bosanac told reporters outside the court offices that the two laws were problematic for more than one reason. "One concerns the fact that there was no public debate on the amendments," he said, adding that this had prompted the Information Ombusdwoman to launch proceedings against the ministries of the interior and defence.

The CPS, whose activists outside the Constitutional Court carried banners reading "Cowards, open the borders" and "Which route do you use to wage wars?", believes that the amended laws violate the constitution because their adoption means the introduction of a state of emergency that puts the army in a very sensitive position.

"We believe that filing this complaint is an act of patriotism because we want to protect the Armed Forces from being put in a situation where they would have to intervene on the border against civilians fleeing war and poverty," Bosanac said.