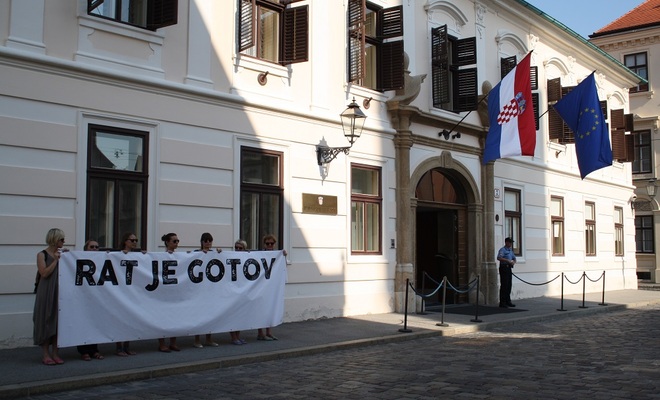 Centre for Peace Studies activists handed out a manifesto to ministers ahead of a government session on Thursday in which they protest against the organisation of a military parade in August on the 20th anniversary of Operation Storm, ask that the parade be called off, and say that a parade is not a dignified celebration of the operation.

They claim the attention of the ruling coalition, the president and the prime minister is directed at the observance of anniversaries of military operations, instead of on successful peace-building in Croatia.

The activists want institutions and political stakeholders to react to what they say is an everyday return to the past with a militaristic rhetoric.

A military parade is not a dignified celebration of Operation Storm and it "has once again divided the Croatian public," Gordan Bosanac told reporters, adding that the parade "has caused an international scandal."

"Relations with some countries have cooled and this is a lesson our government should learn, not to use militaristic, military events to remember what happened in war," he said, suggesting the government remember instead the peaceful reintegration of the Danube river region, "a process in which Croatia gained its full sovereignty, in which no war crime was committed."

"That peace process, which is one of the greatest successes of Croatian politics and the UN, is completely neglected. No political party remembers it and we see no anniversaries," Bosanac said.

The activists stood outside the government with a banner reading "War is over". Their manifesto was entitled "War is over: No to the military parade!"

They claim the parade is a sign of society's weakness and immaturity, and that the money spent on it should have been invested in youth exchange programmes through which young people would "gain knowledge on interculturality, peace-building and non-violence."

"Not even 20 years after the war have we learned much about how to use the war experience to prevent another war," the manifesto says, calling on citizens, the Catholic Church and other religious communities, political parties, civil society organisations, and universities to "condemn loudly and clearly the organisation of the military parade."

They also say it is time to "stop the worrying manifestations of society's militarisation."