Initiative Welcome and CROSOL on Turkish President Erdogan's visit to Croatia: EU, you sold your soul to the devil! 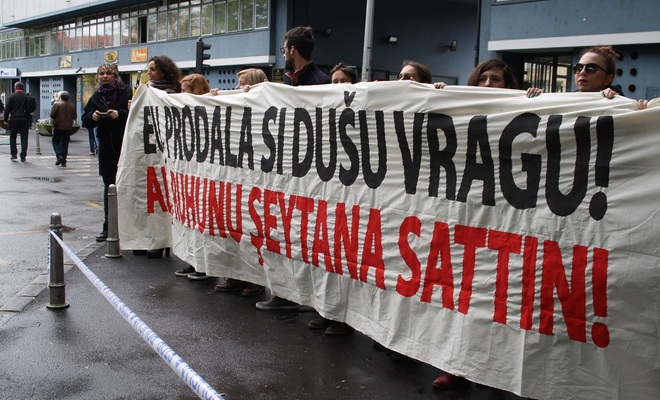 Commenting on Turkish President Recep Tayyip Erdogan's visit to Croatia, the civil society organisations "Welcome" and CROSOL (International Civic Solidarity Platform) on Wednesday called on Croatian authorities to "take off their masks" and stop ignoring human rights violations caused by the Turkish president's policies, whom they called a dictator, under the pretext of business investments.

"The economic benefit (of the investments) for Croatia is extremely suspicious and unclear, however, information and evidence of violation of a number of rights in Turkey is well-known and very much substantiated," the NGOs said in a statement.

They said that Turkish authorities headed by Erdogan were being accused of killing refugees on the border with Syria, that Turkey had unlawfully forced thousands of refugees to return to Syria, and that conditions in reception and detention centres for refugees in Turkey "are unworthy of any living being, let alone people seeking shelter and a safe environment."

"The list could go on and more arguments are available as to why Turkey is anything but a safe country, for example the legal and practical aspects arising from the controversial agreement between the EU and Turkey. Among other things, the EU, including Croatia as a member-country, with that agreement violate international law and the Geneva Convention relating to the Status of Refugees as the key mechanism for assistance to people in need of protection," the two NGOs said.

They stressed that Turkish citizens and members of ethnic groups living in Turkey are among the world's biggest refugee populations seeking protection from violation of human rights and restriction of freedom of expression as well as other freedoms.

"Turkey is a country where activists, academicians and media workers are, on a daily basis, verbally abused, arrested for supporting and publishing content that is contrary to the Turkish authorities' interests, punished with huge fines under the pretext that they defame the ruling party, and forced into self-censorship through bribing of media editors and owners, while some of the cases of murder of journalists remain uninvestigated. If this is not enough, let us repeat that Turkey is a country where workers', women's and LGBT persons' rights are systematically violated, a country where an ethnic conflict between Turks and Kurds has been going on since the end of World War I, and a country where people who think differently face so-called anti-terrorist operations," the statement said.