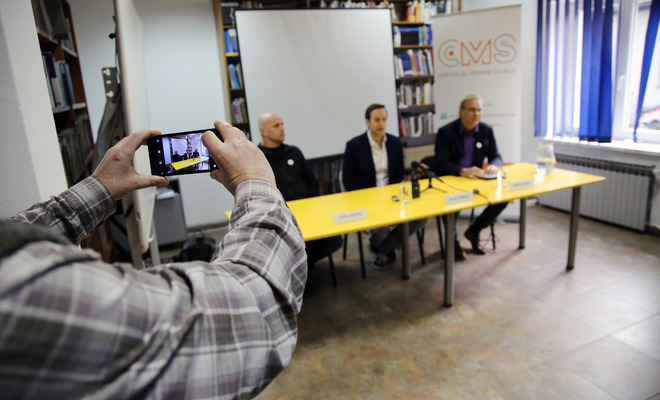 Croatia needs a law that protects people who choose to speak out against any illegality in the public or private sector, announced the participants of the panel "Protect the Whistleblowers!"

The panel was organized by the Southeast Europe Coalition on Whistleblower Protection, in cooperation with the House of Human Rights, GONG and Centre for Peace Studies.

Whistleblowers are often the victims of threats and persecution, so it is important to create a legal framework for their protection. This is also possible to achieve through the Anti-Corruption Strategy, which was announced in Croatia.

Croatia is the only black hole in the region in a sense that it doesn't have that kind of law, which is why it lags behind countries such as Bosnia and Herzegovina, Kosovo, Albania and Macedonia that already have whistleblowers protection laws included in their legal frameworks, said Duje Prkut from GONG.

Mark Worth, one of the coordinators from Southeast Europe Coalition on Whistleblower Protection, pointed out that, unfortunately, this is not a situation of "excessive caution about every little thing": in Croatia, he said, we have seen attacks on those who warn against injustice, although the examples of whistleblowers in Croatia are actually rare. He pointed to examples around the world where people who have exposed illegality were penalized and added that it is necessary to put an end to that because the act of defending the public interest is a human right.

Report to the culprit?

Arjan Dyrmishi of the Albanian Institute for Democracy and Mediation said that the law is important and necessary, but he also warned about the loopholes in the law that are the reason why whistleblowers are not able to exercise their rights in many cases. Kosovo is one example of a place where the law does not function properly, as it was only adopted in order to align its legislation with the EU regulations, emphasized Albulena Sadiku from the Balkan Investigative Reporting Network from Kosovo.

The issue of securing protection for whistleblowers in Kosovo is often impossible because a whistleblower must first contact and report the illegality to his or her superior - quite often, exactly the person involved in illegal activity. If you skip this step and address the media directly, it is not possible to get protection.

Sadiku emphasized that this is discouraging and problematic, but she also said that the law is likely to change for the better. Alexander Bozhinovski from the Center for Investigative Journalism SCOOP-Macedonia shares this hope. He believes that it is necessary that the person who decides to report illegality has the ability to turn to a person of trust. Macedonia has an excellent system of whistleblower protection, equal to the system of witness protection, but so far no one has made us of it.

In general, however, gaining whistleblower status is problematic because not only does one need to follow the correct procedure, but they must also give access to state investigators to all sources of information, including the names of the people.

Saša Leković, the president of the Croatian Journalists' Association, also emphasized the importance of the existing laws that are directed against journalists and warned about the provision of indignity that exists in Croatian legislation often puts journalists in an unenviable position. Of course, journalists are not the only ones who warn about irregularities, but also all citizens and activists who witnessed illegal actions.

Therefore, the panelists once again have underlined the importance of political will for the adoption of the Law on Whistleblowers with the aim to encourage people to expose the illegal and unethical processes and as a message to all those who participate in illegal activities that there is a high possibility that they will be discovered.