"Gaza is the largest prison in the world with more than 1.8 million people" 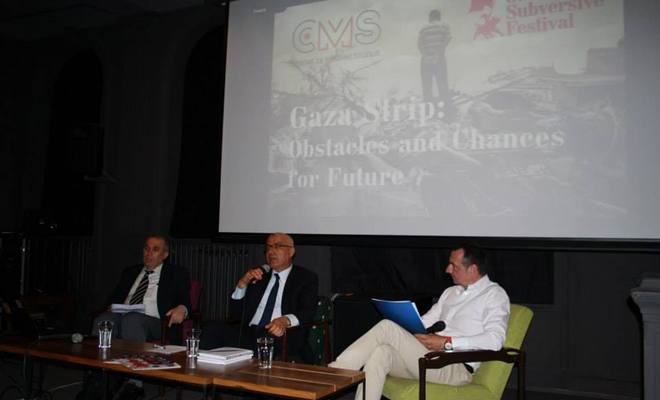 The Centre for Peace Studies and Pal-Think for Strategic Studies from Gaza Strip in collaboration with the Subversive Festival and Ministry of Foreign and European Affairs organized discussion "Gaza Strip – Obstacles and Chances for the Future" with the representatives of civil society from the Gaza Strip to shed light on the situation and to enable better understanding of the context and opportunities for cooperation with local actors.

Speakers on political, social and economic situation in the Gaza Strip were analysts and practitioners Mr. Omar Shabani and Dr. Aed Yaghi with the moderation of Tihomir Ladišić, editor and presenter on N1 television, CNN regional affiliate.

They concluded that everyday circumstances and problems in the isolated Gaza strip are unknown to most Croatian citizens; news is sparse and it offers a one-dimensional picture that is mainly focused on violence, victims and destruction. Except for the "external" problems with the neighbouring Israel and "internal/external" problems with the West Coast, we know little about the political situation, complex relations, and influences within the Gaza Strip. Information on the issues and visions of the future of their civil society and citizens is hardly getting through to us.

The concept of freedom is differently understood and lived in that confined society; needs and problems are additionally generated as the result of a deconstructed social and economic context. The fight between political options as well as between traditionalization and democratization is a source of internal tensions, but also of strengthening pluralism. The options of peace-building, social reconstruction and development are questions that are, in case of this area, hardly finding the answers that can guarantee some kind of durability. Civil society, despite its long history, meets many obstacles and different influences. The panel introduced the context and the problems and visions of solutions that are applicable in the Gaza Strip.

"We do not want to talk only about the suffering. Palestinians are very hard-working, here are based international organizations, newsrooms... We don't have oil and that is good, but we have a social capital. Gaza has a lot of potential, but the problem is politics", said Omar Shaban adding that Palestine can take advantage of the potential of numerous and wealthy diaspora that is ready to come back and help. Although they are aware that Palestine has no future without international recognition, it is important to build diplomatic ties with an emphasis on the economy.

The speakers pointed out how the US should play a better role in the Gaza Strip. "Gaza is the largest prison in the world. Here live more than 1.8 million people", said Aed Yaghi adding that these people primarily need support and encouragement.

They concluded that one of the exit stratgies should be dealing with Hamas. "Hamas shuold be confronted with dialogue".

Photogallery from disscusion is available here.

The arrival of Palestinian experts to Croatia is financially made possible by the Ministry of Foreign and European Affairs of Republic of Croatia as part of the support for development cooperation.