Over 100 organisations urging the EU: Post-coronavirus recovery for a just, solidary and sustainable society! 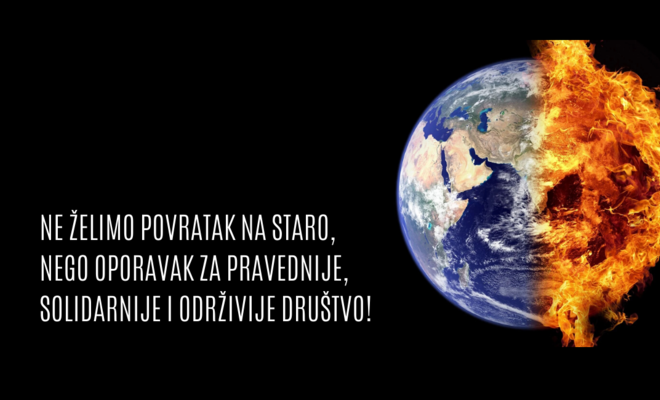 More than 100 non-governmental organisations and 7 networks across Europe sent a letter on today's 50th Earth Day urging to build back better after the pandemic for a just, solidary and sustainable society!

Organisations from around 25 European countries call for urgent action by governments of all EU member states to take more ambitious measures to combat the coronavirus pandemic, which will not lead to an even bigger crisis, but allow for a just, solidarity and sustainable social order in the new post-coronavirus reality. We are also calling on the Croatian Government, as the country currently holding the EU Council Presidency, to lead this process.

The entire letter is here:

We, undersigned civil society organisations from across Europe, demand urgent action from the governments of all EU Member States and a determined leadership of the Croatian Government, as the country currently holding the EU Council Presidency, in adopting ambitious measures to combat the coronavirus infection and to ensure a just social order in the new post-coronavirus reality.
We urge the governments of EU Member States, and in particular the Croatian Government, to:

1. Draft a European Union joint response to combating coronavirus COVID19 by developing a European Solidarity Fund which would also include Global South countries;

3. Respond to the economic crisis caused by the coronavirus pandemic through the European Green Deal which should be based on halting unrestricted growth and a fair redistribution of wealth.

A global pandemic of this magnitude is a centennial occurrence due to its extraordinary impact and consequences on the entire social, political and economic life worldwide. The usual rules of business and competition need to be redefined in order to maintain life and vital functions of society. The European Union must mobilize the financial resources and knowledge of private and public business entities of all its members to ensure the satisfactory production of the medical equipment needed to combat the pandemic. It will only be possible to reach an agreement between Member States if they agree to mobilize production capacities on a non-profit basis, covering only production costs. In response to this global crisis, the European Union must not forget the so-called Global South and developing countries. We are urging the EU to develop a European Union-wide solidarity fund to finance a joint response to the spread of the coronavirus infection, which would also include assistance to the Global South and developing countries, not just EU accession countries.

Trust in science has proven to be crucial in addressing this crisis. It must not be undermined by political instrumentalisation. The greatest danger lies in using the health crisis to impose disproportionate restrictions on human rights. Particularly controversial are indefinite restrictions and those passed outside democratic procedures and customs.

The involvement of entire societies in this crisis has more clearly than ever shown us the importance of the public sector. Without public sector services, including healthcare, it would be impossible to provide assistance to all those in need. At the same time, public sector services enable the functioning of daily life in a context of social isolation. Countries with weaker public sectors were generally worse off in responding to the pandemic, and consequently suffer more severe consequences.

During this crisis, calls for state intervention are coming from all sides, even from actors who are otherwise advocating a minimal state. States need to intervene not only to prevent the collapse of their economic systems, but also to preserve and strengthen their public sector. The public sector cannot be built overnight once the crisis arises, and due to the nature of pandemics, we expect a longer recovery than usual. It is very possible that the spread of the infection will relent and re-emerge in waves over a longer period, and societies must prepare to function in this new reality. The existing Maastricht criteria framework, mainly criteria regarding the limitation of state deficit and public debt as well as austerity policies, make this adjustment impossible. These criteria need to be re-negotiated. In order to show initiative and an understanding of the gravity of the situation, Croatia, as the country holding the EU Presidency, must urgently begin these negotiations.

The political response to this crisis should contain an adaptation to the new conditions at which societies should function with adequate assistance to those most affected by this crisis - the unemployed, workers, the homeless, refugees and other migrants, women, artisans and microentrepreneurs who, unlike large entrepreneurs, do not have significant business assets which they can and should employ to overcome this crisis.

The European Green Deal is one of the appropriate frameworks for this policy response. It must not be abandoned under pressure from the private sector to make up for the profits lost due to the blockade caused by the health crisis. Many spontaneous and positive responses to the blockade - such as local food production, business digitalisation and communication, reduction of consumerism, strengthening of solidarity and cooperation through reliance on the public sector - need to be maintained and improved through the European Green Deal. Those who need to be saved from the consequences of this crisis are workers, not business models that maintain the status quo and thus deepen the crisis.

The lessons of exponential growth have been painfully recalled by many with the increasing number of coronavirus patients. The pressure that an exponential increase of sick people is putting on our health care system is comparable to the pressure that the growth of our economies is putting on planet Earth and its resources. The way out of this crisis should be based on abandoning our blind attachment to economic growth and an urgent redistribution of existing goods while respecting planetary boundaries. Otherwise, we are risking more frequent blockade scenarios such as the one caused by the coronavirus, but in future it could happen due to the consequences of the environmental crisis.

The European Green Deal is an opportunity for the so-called “green recovery” of the European economy. We must resist the pressure of the fossil fuel industry, multinationals and various private interests to use public money to bail them out. The European Green Deal must therefore be more ambitious and based on social justice, strengthening public infrastructure, redistribution of wealth through progressive taxation and solidarity. The adoption of measures and policies under the European Green Deal must in no way be stopped or slowed down by the current health crisis, because the climate crisis has not disappeared, so the recovery from the pandemic must take place at the same time as mitigation of the climate crisis.

32. Kurziv – Platform for Matters of Culture, Media and Society, Croatia

53. Friends of the Earth Sweden/Jordens Vänner

57. Platform for theory and practice of commons - Zajedničko (Serbia)

58. Friends of the Earth Cyprus

66. The Greens Movement of Georgia

68. Centar za životnu sredinu/Friends of the Earth Bosnia and Herzegovina

76. National Society of Conservationists - Friends of the Earth Hungary

85. Not Here, Not Anywhere Ireland

89. A 11 - Initiative for Economic and Social Rights (Serbia)

91. Friends of the Earth Ireland

92. Friends of the Earth Scotland

94. NOAH - Friends of the Earth Denmark

99. "An eye for environment" Network (Albania)

110. Friends of the Earth Europe

111. Young Friends of the Earth Europe