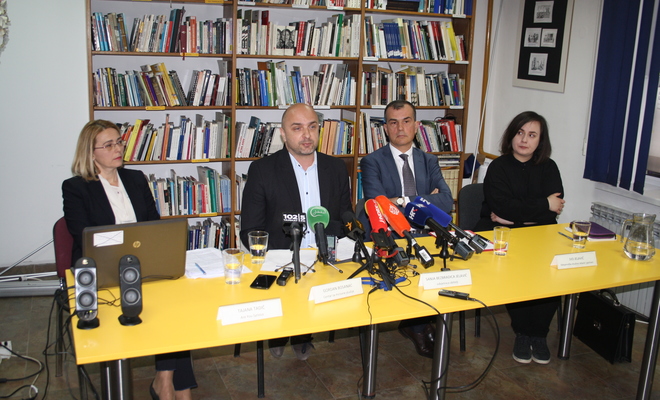 The civil society organizations Are you Syrious (AYS)?, Centre for Peace Studies, and lawyers Sanja Bezbradica Jelavic and Ivo Jelavic held a press conference on Apr 18 and warned about the pressure that the Croatian Ministry of Interior puts on the attorney's office that protects refugees, as well as against the activists of organizations providing legal and humanitarian protection to refugees.

Sanja Bezbradica Jelavic is an attorney representing a family of Afghan refugees in criminal proceedings against the Ministry of Interior regarding responsibility for the tragic death of their 6-year old daughter, Madina. The lawyer tried to get in touch with the family on numerous occasions, after they have been detained in the detention centre in Tovarnik, following their asylum request.

However, the police has refused to allow the attorney access to the family, claiming that she is not authorized to represent them. Moreover, her office has been visited by the Police National Office for the Suppression of Corruption and Organized Crime (PN USKOK) to investigate existence of the power of attorney for the Afghan family, claiming that the signature of Madina’s parents on the power of attorney is a fake one.

Madina's sister contacted (messaged) the Centre for Peace Studies, claiming that they have been locked up and their access to the lawyer has been denied. The police stated to Madina’s family that the power of attorney has been signed in Serbia, and therefore is not valid in Croatia.

„This kind of police treatment of our clients is a direct obstruction of performing attorney's work“, warns Ivo Jelavić, noting that it is very easy to prove if the power of attorney is valid, namely that the attorney and the party meet and the party confirms or refuses the power of attorney, but the police does not allow for that to happen. He points out that it is particularly worrying that the family tried to contact them several times, but the police prevented them from doing so. He says that even in cases of the most serious criminal offenses the police does not deny contact with the parties.

Police exercised the pressure also against AYS through criminalization of solidarity. "When a family entered Croatia to avoid being pushed back to Serbia for the third time, they turned to us to help them seek international protection, after which our volunteer immediately contacted the police and went with the police to meet the family," said Tajana Tadic of the association Are You Syrious? . However, the day after the media circulated information about what was happening to the family, the Ministry of Interior informed AYS’ volunteer that they would initiate a misdemeanour procedure against him for allegedly assisting the family in crossing the border illegally.

In addition, yesterday, after the announcement of the press conference regarding police pressures and intimidation, police delivered calls for informal interviews to the activists of CPS and AYS, scheduled for the exactly same time as the press conference. “We consider this to be an inadmissible attempt to intimidate and put pressure on volunteers, as well as direct attempt to limit the freedom of expression of human rights activists”, said Gordan Bosanac form CPS. He also stated, “Police has shown once again that they do not hesitate to use repression for their goals. We are afraid that all this is done with the goal of expelling the family out of Croatia and therefore stopping the processes against the Ministry of Interior”.

Namely, Hussiny family filed criminal charges against the police of the Republic of Croatia on the grounds of negligent homicide of their six-year-old daughter Madina. Therefore, the police, against whom the family, together with the support of attorney and civil society organizations, filed criminal charges, now leads the procedure for granting international protection to the family and has the exclusive right to access to the family. AYS, CPS and attorneys consider this as the evident interest and motive of the police to obstruct criminal prosecution of the police forces as well as continuing to avoid responsibility for possible illegal treatment of refugees on the borders of the Republic of Croatia.

For all the reasons stated, organizations announced that they would request from the Parliamentary Committee for Internal Policy and National Security, as well as from the Committee for Human Rights and the Rights of National Minorities, forming of an investigative committee that should examine the harsh abuse of the repressive mechanisms towards the activists and human rights attorneys and advocates.

Organizations will also inform competent authorities and bodies of the European Council, European Commission and European Parliament about the police pressure and intimidation. In addition, organizations are warning that these practices are especially in contradiction with the forthcoming Croatian presidency of the Council of Europe (in May 2018) as well as with the preparations for Croatia’s membership in the Schengen Area.

Finally, AYS, CPS and attorneys are demanding from the Ministry of Interior to implement the measure ordered by the European Court of Human Rights, to free the family and to accommodate them in a secure and open type of accommodation, as well as to provide the family their right to legal protection. In addition, organizations demand from the police to stop with staged processes and pressures against activists and human rights attorneys.

For more information, please contact Centre for Peace Studies at cms@cms.hr or Are Your Syrious? at  areyousyrious@gmail.com .