How the arms industry is hijacking Europe’s defence policy 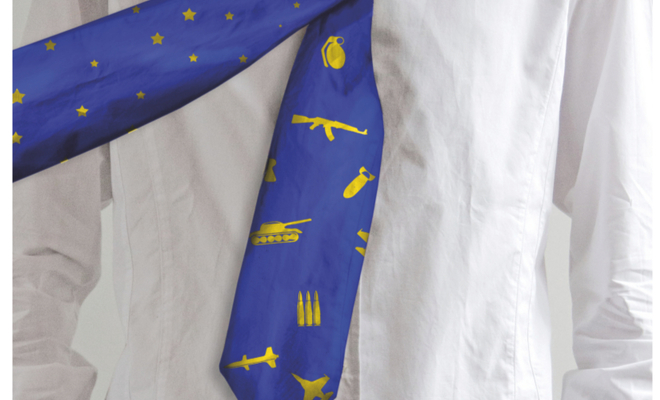 40 billion euros. That’s how much the European Union wants to spend on the research, development and procurement of new weapons during the next 10 years. The establishment of the European Defence Fund is an unprecedented acceleration in the militarization of the EU and only serves one purpose: sustaining the competitiveness of the arms industry. The question, which weapons should be developed and if they are actually needed, is not even asked.

The decision making process was heavily dominated by corporate interests. Civil society nor

the European Parliament were given any substantial input on these far reaching decisions. Based on disclosed EU documents, Vredesctie shows how the arms industry had access to every stage of the decision making process, from setting the agenda to drawing up the modalities of the military research programmes. It documents the symbiotic relationship between the arms industry and the EU institutions and the effect of this relationship on the creation of a European Defence Fund.

Several observations stand out in the report:

·         In five years time, the combined lobbying budget of the top ten of the European arms companies has doubled, from 2.8 million euros to 5.6 million euros a year.

·         The Group of Personalities on Defence Research, the advisory body which set out the agenda for a EU military research programme, was heavily dominated by the defence industry. Out of sixteen members, ten had links with the defence industry. Seven members were representatives from arms companies, two representatives were from private research institutes which stand to benefit from a military research programme and one member is a Member of the Eurpean Parliament, Michael Gahler, who is a member of an arms lobbying organisation. Independent voices were as good as absent.

·         The setting up of a Group of Personalities is rare and seems to have been deliberately used to evade even basic levels of transparency as the GoP was not registered as an expert group. Expert groups are to a certain extent subjected to rules regarding transparency such as the disclosure of minutes, dates of meetings and agendas.

·         An analysis of the policy proposals of the European Defence Action Plan shows that some of these proposals were almost literally copied from recommendations made by the defence industry.


The undue influence of these companies at every level of the decision-making process has led to an outcome which solely takes economic considerations into account. This raises questions on the democratic legitimacy of these policies.

The military technologies developed now, shape the wars of the future. The European Union has already started developing autonomous systems. Despite warnings from both the scientific community as well as the European Parliament, these decisions to develop autonomous weapons are taken without any public debate.

The competitiveness of the arms industry has become a policy goal in and of itself. Big scale arms development programmes are necessary to keep the defence industry in shape. The question, which weapons should be developed and if they are actually needed, is not even asked.