We need a resilience plan, not resistance to change! 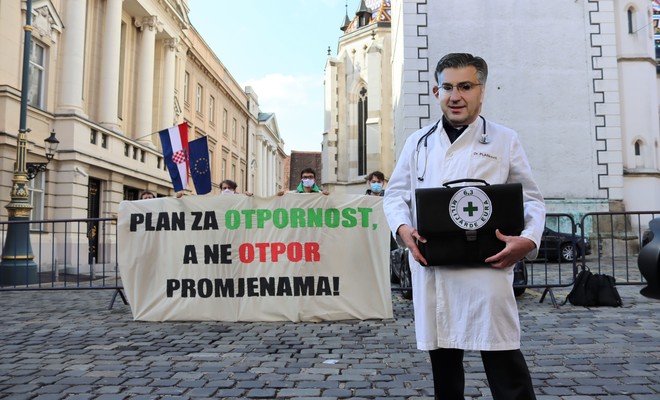 The Croatian Government's Recovery Plan contains no innovation or ambition, and it’s currently a set of measures that look more like an elementary school collage than a serious plan for recovery and low-carbon development of Croatia.

On the occasion of informing the Parliament about the summary of the Recovery Plan, Zelena akcija/FoE Croatia, the Society for Sustainable Development (DOOR) and the Center for Peace Studies (CPS) held an action to point out once again the complete lack of public participation in drafting the National Recovery and Resilience Plan. At the same time, they warned of the substantive shortcomings of this document, which will determine the development of Croatia not only in the next five years, but will also significantly affect the lives of future generations. "The National Recovery Plan, a document that gives Croatia the opportunity to access a budget of 6.3 billion euros in grants, is perhaps the only opportunity for a real transition to a low-carbon society. However, it is evident from the published summary that such a Plan will not take us through this crisis nor will it make us more resilient to future crises ", said Luka Tomac from Zelena akcija.

Last year, more than a hundred civil society organisations, representatives of small businesses and various professional agencies issued a public appeal for a green recovery. "The government has not only disregarded our proposals, but has completely ignored the public and is still hiding the entire document, which should be sent to Brussels in two weeks. What we want to see in the Plan is investment in collective immunity and resilience to future crises, and not financing of unsustainable practices and business-as-usual models and projects”, Tomac added.

Miljenka Kuhar from DOOR pointed out that the Plan summary does not show even the slightest ambition regarding measures in the field of energy, and it does not show the strength to implement real reforms and measures. The best example is that the expected result in the area of decarbonisation of buildings is the adoption of a program to combat energy poverty, which the Government has committed to adopt by the end of 2019 and then by 2020. "According to the Central Bureau of Statistics (2019), for 6.6 percent of Croatian citizens living in households that cannot afford adequate heating in the coldest months, the adoption of programs, which do not follow clear measures of assistance, monitoring and data collection, will not bring anything new. But the Government has not only forgotten the poorest citizens who cannot afford to pay their heating bills, but also the citizens who would like to contribute to the development of a low-carbon society by producing their own energy from renewable sources”, Kuhar explained.

The national legislative framework still does not allow citizens, for example, within an apartment building, to organise into sustainable energy communities and thus contribute to reducing their own costs, but also greenhouse gas emissions. According to the summary of the Plan, it seems that the Government does not take the citizens and the production of energy from solar power plants seriously because by 2026 it envisages the connection of only 800 MW of electricity produced from renewable sources. "For a country that has committed itself to producing at least 36.6 percent of its energy from renewable sources by 2030, this plan does not only lack ambition, but its low level of involvement of citizens and local communities in renewable energy production is a serious concern. Croatia needs more, not less, solar power plants owned by citizens", Kuhar added.

Not only economic but also social recovery is needed, and resilience needs to be woven into the long-term vision of societal progress. However, recovery and resilience are seriously threatened by the lack of a coherent vision of the development of society and its individual segments, but also by harmful ideas that could slow down recovery and jeopardise resilience.

"The Plan summary announces the sale of state property, ie that by 2023 the sale of at least 150 companies that the Government doesn’t consider of special interest will be announced. Sale and privatisation are not management. Good governance in the 21st century implies citizen participation and civic control over the spending of public money, and we want to see it in this Plan. How can a state that sells and mismanages its property and doesn’t invest in it be truly resilient to crises?", commented Sara Lalić from CPS. She added that although the Government has recognised the need for education reform and stated in the Plan the need to invest in infrastructure, which would meet one of the preconditions for the introduction of one-shift and full-time classes and equalisation of conditions and access to education in Croatia, unfortunately it is not enough. Instead of the tradition of individual partial interventions in education, for really quality and accessible education, Croatia needs long-term, concrete, mutually harmonised and coherent interventions in the education system and beyond. With the current Recovery Plan, we miss another opportunity to achieve that ", Lalić added.

The Plan summary also contains vague plans for changes in labor legislation aimed at encouraging indefinite employment, but lists vague terms such as innovative forms of work and labor market flexibility, which has so far been synonymous with reducing the scope of workers' rights. It is also unbelievable that the pension reform includes changes in legislation to allow work after the age of 65, despite the fact that citizens have already rejected such an initiative in 2019.

Given the scandalous procedure in which key stakeholders and the general public didn’t see the full document, let alone have the opportunity to participate in a public debate, the associations hereby published a draft of the entire National Recovery and Resilience Plan from December last year, which they received from foreign sources. "Perhaps the version we have at the moment is outdated, but we call on the Government to show us a newer one", Tomac concluded.

See the photo gallery from the action HERE.