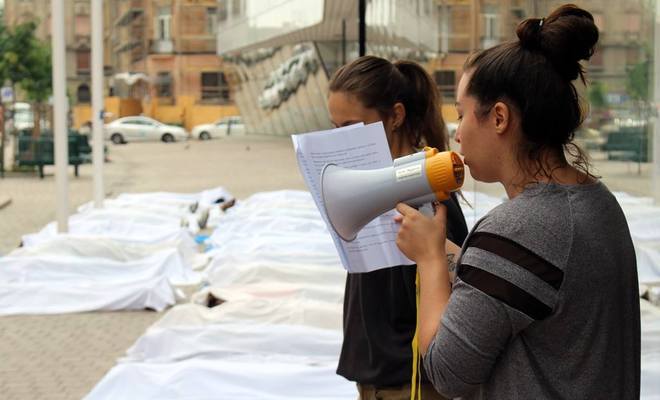 World Refugee Day was marked in Zagreb on Saturday with a performance symbolically showing dead bodies, with the reading of the names of people who lost their lives in the Mediterranean and whose number has risen to 2,000 since the start of 2015, and with the distribution of information leaflets.

The organisers of the event called for greater solidarity with refugees, as well as for a critical attitude to the EU's border regime and migration policies.

"The purpose of today's action is to send a message to the public and warn it of a growing number of migrant refugees who die at Europe's door, mostly in the Mediterranean, and to make our Euro-parliamentarians aware of the negative aspects of restrictive European border policies and urge them to use their power and advocate change and greater solidarity with refugees, both on the European and national levels," an activist of the Centre for Peace Studies, Lucija Mulalic, said.

She said that in the last 10 years, Croatia received 5,000 asylum applications and approved around 150. Asylum can be granted on three grounds - if a person is persecuted in their country of origin because of their political beliefs, because of race or because they belong to a social group that is not accepted in that country, and lately such applications have been submitted by homosexuals, Mulalic said.

The protest action "Evaded Death. The Fortress Europe: Clean and Responsible. How Many Deaths to Solidarity?" was attended by volunteers of the Centre for Peace Studies, students of peace studies, members of the No Border initiative, of Medika and of White Angels - groups that work directly and indirectly with refugees in Croatia.

Even though the EU's migration policy is implemented under the slogan "Justice, Freedom and Security", in reality the EU is closing its external borders and internally pursuing "witch hunts", they said.

In Croatia, too, refugees are isolated in camps on the outskirts of cities, where they encounter racist attacks, humiliating acts, restriction of movement and dehumanising deportations, the activists said.

Croatia has received more than two billion euros through the Schengen fund to improve its border control and build additional detention centres. Building one such centre costs around 3.3 million euros, they said.

"On World Refugee Day we call for the need to adopt a critical attitude to the EU's border regime and migration policy and urge more solidarity and understanding for people with the same destiny as ours 20 years ago," they said.