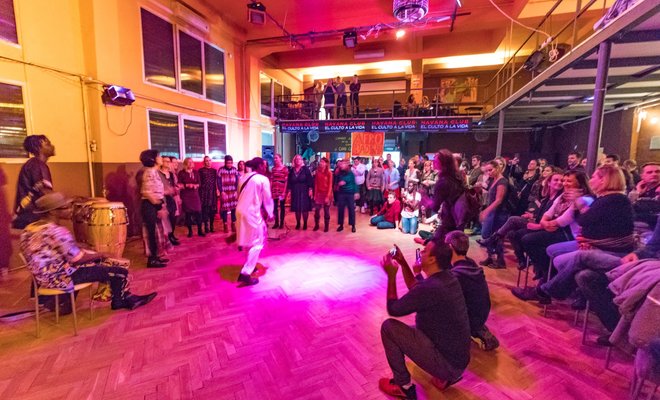 As part of BRIDGES project, Centre for Peace Studies in collaboration with association Afro Badinya organised a second integration event on Friday, 22nd of November. The event titled Cro-Afro Party was held in Buena Vista club in Zagreb. Afro Badinya, meaning African family, is an association consisting of both migrants and locals. The association is promoting African cultural heritage through creative musical and artistic projects. The association stresses its goals are intercultural exchange, promotion of equality for all and prevention of racial discrimination.

The Cro-Afro night consisted of several parts: two workshops led by dancers and musicians working in Afro Badinya: a drumming workshop and an Afro dance workshop. In addition, a refugee Senegalese chef living in Croatia prepared tasty Senegalese dishes for the guests.

After the workshops, the second part of the event was held. First, the visitors got a chance to see a performance of a Ghanaian acrobat living in Croatia, which was followed by a musical performance of Zbor Domaćigosti (choir Homeguests) singing together with members of Afro Badinya. The choir Domaćigosti (Homeguests) is an amateur choir consisting of old and new members of Croatian society, where it is not important who is “local” and who is “foreigner”. The choir was founded in 2016 and has been preforming in different world languages, with a goal to reduce prejudices and xenophobia in Croatian society through cultural exchange.

Finally, a percussion performance together with an open-for-all musical jam and a DJ session closed this culturally rich evening. The event brought together new members of Croatian society and locals in an attempt to bridge the gaps of our differences through cultural exchange.