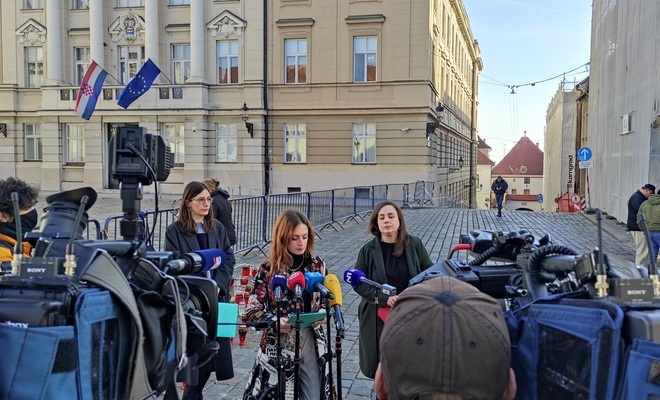 The European Court of Human Rights has confirmed that Croatia illegally expels people. The judgement in the case of young Madina Hussiny that died during such expulsion in 2017 is not a shame only for the Ministry of the Interior or the police, but for the whole of Croatia, all of us, its citizens, and especially for the Government.

“We expect Prime Minister Plenković to urgently dismiss those responsible for the death of a child at our borders due to the actions of institutions that we, the citizens of Croatia, finance,” the Centre for Peace Studies and Are You Syrious said at a press conference in front of the Croatian government.

“Other than urgent identification and sanction of direct perpetrators, we demand the dismissal of General Police Director Nikola Milina and Deputy General Police Director and Head of Border Police Directorate Zoran Ničeno for their command responsibility. For their political responsibility, we ask the Prime Minister Plenković for dismissal of Minister of Interior Davor Božinović, as well as State Secretary Terezija Gras who participated in pressures against human rights defenders and blocking the independent international investigations”, said Sara Kekuš from Centre for Peace Studies.

Namely, the European Court of Human Rights issued a judgement yesterday finding that the Republic of Croatia violated Madina's right to life, treated children inhumanely by keeping them in detention, illegally deprived the whole family of their liberty, collectively expelled part of the family from Croatia, and ultimately prevented them from accessing their lawyer. Little Madina Hussiny and her family have thus been recognized by the European Court of Human Rights as victims of an illegal expulsion that resulted in the loss of the life of a six-year-old girl four years ago, on November 21, 2017.

“The European Court concluded that Croatia collectively expelled the mother and her six children from Croatian territory in the middle of the night outside of any legal procedure and without considering their individual situation. Also, the Court found that Croatia did not carry out effective investigation on the circumstances that led to the six-year-old girl’s death and thus violated the procedural limb of the right to life of little Madina”, explained Antonia Pindulić, legal officer of Centre for Peace Studies, the organization that hired the lawyer Sanja Bezbradica Jelavić and intervened in the case as a third party.

Organizations added that the European Court of Human Rights is the last resort when we talk about the protection of human rights. The Hussiny family sought justice in Croatia, but did not receive it from Croatian institutions. The criminal complaint was rejected because the State Attorney's Office gave full confidence to the findings of the Ministry of the Interior instead of examining the evidence and respecting the testimonies of the victims and witnesses. At the same time, the recordings of thermal imaging cameras, as key evidence available to the police, have mysteriously disappeared.

This extremely important judgement states, among other things, that our volunteers were intimidated and even persecuted for supporting the family of little Madina, precisely for this case not to reach Strasbourg.

“This verdict must not be limited to the Republic of Croatia paying 40,000 euros in non-pecuniary damage to Madina's family from the state budget. For all the victims in our borders, for the people who died there, as well as for all the activists who have been intimidated to keep quiet about it, it is time to bring to justice those who enable and cover up this violence, and that responsibility must be sought at the top of the Ministry of the Interior”, said Tajana Tadić from AYS.

Unfortunately, the verdict cannot restore the lost child's life, but we hope that it will be a turning point for policy changes and that something like this will never happen again to any person, child, woman or man again, the organizations point out.