Children and unaccompanied children systematically pushed back from Croatia 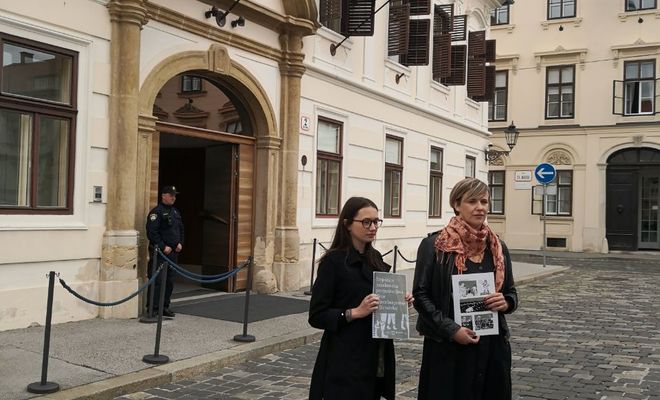 This morning, the Centre for Peace Studies and the Welcome! Initiative presented to the Government the “Report on violent and illegal expulsions of children and unaccompanied children” where the activists collected testimonies of children who sought protection from Croatia, but Croatia answered with violence.

"We came to the door of Prime Minister Plenković and Deputy Prime Minister and Minister of the Interior Božinović, who have been turning their backs on testimonies and accusations for years and silently pursuing a policy of flattering the European Union. Even the most vulnerable are not excluded from violence - children ", said Tea Vidović on behalf of the Welcome! Initiative.

The report submitted to the Government by the organizations provides testimonies of children and their families and unaccompanied children on violent and illegal methods that they had to experience from the hands of police authorities. These illegal and inhuman behaviours violate national laws, international law and human rights, prevents access to international protection and, most importantly, marks children's lives. Although the Government of the Republic of Croatia and the Ministry of the Interior should take into account the special vulnerability of children, respect their rights and best interests, children experience police brutality and limitation of their freedom for hours without access to water and food.

"While the government uses every opportunity to emphasize the importance of border protection, we wonder in which way is police protecting Croatian borders? By beating children, confiscating their personal belongings, locking children in police vans for several hours in which they are exposed to extremely high or extremely low temperatures, shooting and using electric shocks, is this how the police protect Croatian borders? ”, points out Ana Ćuća.

The exact number of children who are victims of police brutality remains unknown. The Border Violence Monitoring Network has reported 209 cases of violent and illegal expulsions of children from Croatia since 2017, while Save the Children recorded 2969 expulsions of children at the borders in the Western Balkans during the first 9 months of last year.

Two cases are currently pending at the European Court of Human Rights against Croatia, both involving violence and pushback. The first is the case of the family of the tragically late six-year-old girl Madina Hussiny, who has been killed at the Croatian-Serbian border. The second includes pushbacks, illegal detention and inhumane treatment of a 17-year-old Syrian boy by Croatian police, who has been pushed back to Bosnia and Herzegovina despite seeking asylum in Croatia.

The report presented today is the sixth report on violent and illegal expulsions published in the last four years, and it is the collective work of the Centre for Peace Studies, the Society for Psychological Assistance, the Welcome! Initiative and the Border Violence Monitoring Network. It also brings a short graphic novel of little Madina for whose death no one has yet been held accountable.

Therefore, the organisations ask the Government and the Ministry of the Interior to finally take responsibility and for those who order and carry out systematic violence to be sanctioned. Responsible institutions are obliged to investigate those who commit violence and push back children in need of protection. All children deserve justice and protection.