Criminal complaint against Croatian policemen for inhumane treatment of refugees 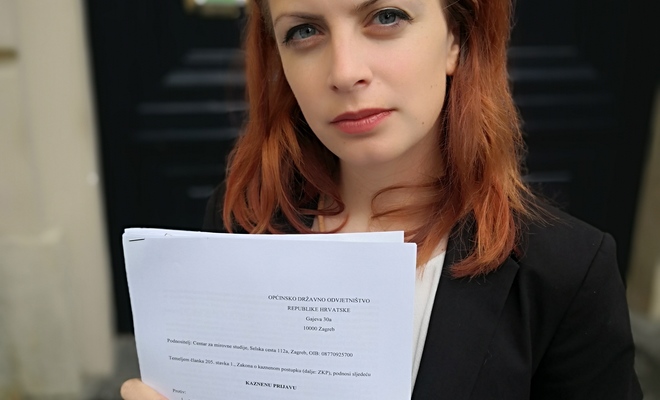 Today, Centre for Peace Studies filed a criminal complaint to the State Attorney's Office in Zagreb against the unknown perpetrators police officers based on a reasonable doubt of degrading treatment and torture of 33 people and their violent, illegal expulsion from the territory of the Republic of Croatia to Bosnia-Herzegovina.

These are four separated cases combined into one criminal complaint due to similarities in treatment. In particular, among other, all victims suffered torture and degrading treatment: according to their testimonies, the police marked them with permanent, orange spray all over their heads.

For almost four years now, people who come to our country in search of safety have systematically been exposed to even greater risk. This risk is the practice of the Ministry of Interior and its orders, through which refugees are being violently pushed back using batons, guns, punches, violating human dignity and safety by taking refugees’ clothes off in the middle of the forest and taking away everything they have. In early May, a new, deeply humiliating element was added to this practice - marking refugees and other migrants with a permanent, orange spray cross over their heads.

In contact with the victims and witnesses of these serious human rights violations, the Centre for Peace Studies is filing criminal charges and, if needed, will take other legal steps to support the protection of the rights, life and human dignity of these people.

"We ask for an effective investigation and sanctioning of the perpetrators. We expect from the new leadership of the State Attorney's Office to recognize the gravity and seriousness of these crimes and act according to its duty and according to the law - thus stopping the practice of the old leadership", said Antonia Pindulić on behalf of the Centre for Peace Studies.

From the numerous testimonies, witnesses, photographs, media reports and organizations familiar with the cases, there is a well-founded suspicion that police officers deeply violated their legal powers, abused their position in order to torture, humiliate and push back refugees, including children. In addition to inflicting bodily injuries, material damage, suffering and mental pain, they threatened victims' lives using violence that reached as far as hitting people's heads with the door of a police vehicle and shooting at them.

The very minimum that we, as a society, expect from the police is - to respect the law. Numerous local and international organizations have been reporting on violent push backs for almost four years. Moreover, in 2019 police officers themselves testified and brought to the attention of the Ombudswoman that they received instructions and were forced to carry out illegal orders from their superiors. The allegations of systematic violations of our laws and several criminal offences are required to be investigated by the State’s Attorney office.

Because of all this, the Centre for Peace Studies asks the State Attorney's Office to conduct an effective investigation, in order for the perpetrators of these crimes to be sanctioned. In this way, they will not only fulfil their legal duty but also show care for the lives and dignity of refugees and other migrants. Finally, the CPS urges police officers who care about the protection of human lives to refuse to carry out illegal orders and report them, in order to protect their rights and the rights of their colleagues.