CPS filed one more criminal complaint: What is the connection between Croatian police and armed men in black? 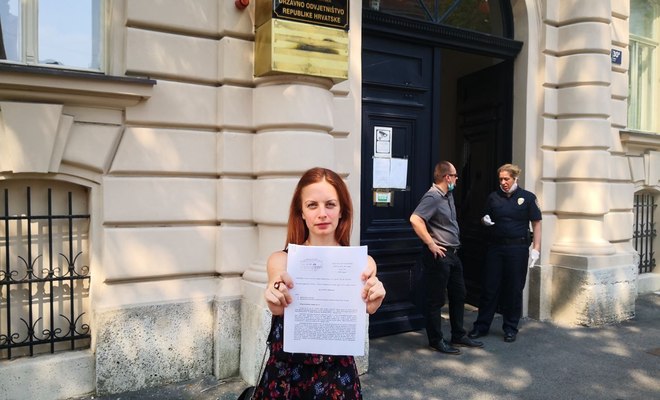 Today, Thursday, July 23th 2020, the Centre for Peace Studies filed one more criminal complaint to the State Attorney's Office in Zagreb against the unknown perpetrators due to well-founded suspicion that at the end of May they tortured, humiliated and pushed back 16 refugees from the territory of the Republic of Croatia to Bosnia-Herzegovina.

Five refugees who suffered serious injuries have testified on this account, one of whom had both arms and a leg broken by the perpetrators. It is highly worrying that the reason for this inhumane treatment is most likely the color of their skin and belonging to the vulnerable refugee population.

Namely, eight armed men in unidentified black uniforms and with balaclavas on their heads treated in inhumane manner persons in search of protection. According to the description given by the victims, the perpetrators probably belong to either a special unit or the so-called operation "Corridor" of the Ministry of the Interior. Armed men in black tied refugees to the trees, fired guns near their ears and their feet, beat them with everything they had at hand, and took all their belongings upon death threats. Then, the perpetrators humiliated the group of refugees by rubbing mayonnaise, ketchup, and sugar into the wounds they had previously inflicted. In the end the refugees, many of whom could not walk due to serious injuries, were handed over to police officers who further pushed them back to BiH.

The testimony recognizes the cooperation between the perpetrators in black uniforms and the police, and we expect the State Attorney's Office to determine what form of cooperation it is and whether it is a special unit of the Ministry of the Interior. It is especially important to take into account the testimonies of the police officers who speak about the police operation “Corridor”, the description of whose actions corresponds to the description of this case, but also to the previous testimonies of refugees. Unfortunately, this is just one in a series of cases that are continuously reported by civil society organizations, media, the Ombudswoman of Croatia and international institutions. These reports, photographs, videos and numerous testimonies of both victims and Croatian police officers, indicate the systematic nature of these inhumane practices, while the lack of effective investigations shows a disregard for human lives and the rule of law in Croatia. Despite that, Minister Davor Božinović remains at the head of the department in which such serious human rights violations occur.

Recently, the Administrative Court in Slovenia referred to a well-based suspicion at these human rights violations which are not investigated, emphasizing that the evidence gathered in the last four years on beatings, thefts, torture and violent, pushbacks of refugees and other migrants from Croatia has never been effectively denied. Therefore, the Centre for Peace Studies calls on the State Attorney's Office to conduct an effective and independent investigation into these crimes for which it is prosecuted ex officio, as well as for the probable organization of such practices - and to sanction the perpetrators.

It is time that the institutions of the Republic of Croatia stop rejecting and ignoring evidence of police brutality at Croatian borders. This evidence should be examined in an efficient and independent manner and the findings of investigations published. Instead of systematically carrying out illegal expulsions, the competent institutions need to systematically investigate these crimes and practices, prevent their execution by establishing independent border controls, and ensure that Croatia is a country that truly protects the lives and safety of all people on its territory.