It is not easy to play when they shout to you that you are a monkey... 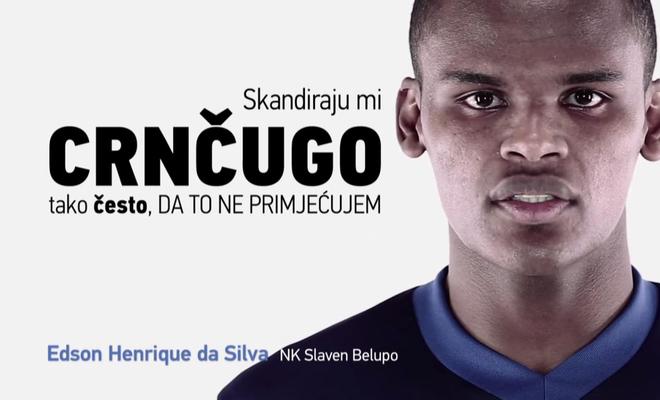 On the occasion of the International Day for the Elimination of Racial Discrimination, Centre for Peace Atudies (CPS) and the association of football fans of a Zagreb club „Bijeli anđeli“ („White angels“) are promoting a commercial to draw attention to consequences of racialistic and xenophobic behaviour towards people with different skin colour.

The commercial is a part of the campaign „All colours are beautiful,“ which started immediately before the beginning of the football World Cup in Brazil with the aim of raising awareness in the public about negative consequences of xenophobia and racism, as well as abating social distance towards people with different skin colour, especially refugees in Croatia.

In the last few years, we have fought actively against all forms of discrimination and violence. Furthermore, we have observed racialistic and xenophobic messages and behaviours in football. We've done this not only on behalf of fans, but also players and other employees in the field of football. Nevertheless, we want to send a message to society as a whole with this commercial and campaign, because the problem of racism is wider and more complex, and can be found in other social areas as well.

The results of the research, which CPS provided in 2013 on an adequate sample of citizens, shows that 37 per cent of this sample consider asylum seekers as a threat for the safety of citizens and their possesions, while 20 per cent of them believe that black people pose a threat because they don't care about the interests of the Republic of Croatia. Moreover, we had the chance to follow racial and xenophobic statements of public persons from different areas of society - politics, culture, sports, etc. - via media in the last couple of years. Those statements weren't sanctioned by society or by law. These attitudes have very strong and palpable consequences for strangers who come to Croatia, and other minorities in their everyday life who suffer from discrimination in important areas of their lifes like employment and access to goods and services on a daily base. The system is closed off to diversity, whcih is apparent due the barriers blocking refugees who live in Croatia.

Although there was a lot invested into the legislative and institutional system of the fight against discrimination in Croatia, is is clear these efforts weren't enough in terms of one's everyday life. Civil society organizations work devotedly on the affirmation of introducing civil education, considering that we can fight racism, xenophobiam, and discrimination in society only by systematic and quality education.

The commercial „Stop racism and violence in football stadiums“ is a result of the production of „Fade In“ and was created by Iva Kraljević and Miroslav Sikavica. Football players from different countries participated, and it carries out a universal affirmative message of tolerance and accepting diversity. Jean Evrard Kousassi (former player of NK Hajduk), Goodness Ohiremen Ajayi (NK Rijeka), Edson Henrique da Silva (NK Slaven Belupo) and Badara Badji (GNK Dinamo) partipated  in the commercial. It can be found on YouTube.