Solidarity on paper, a foul play in reality 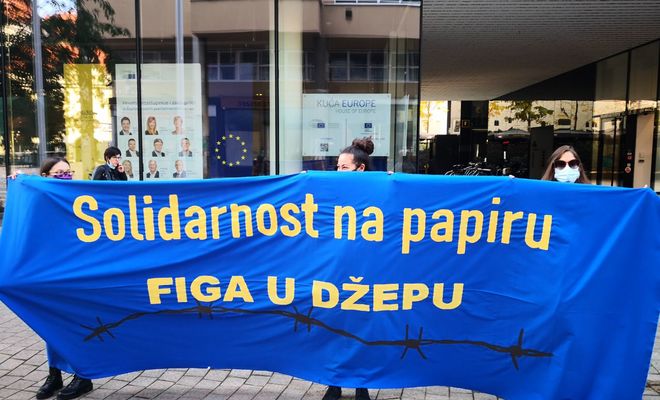 New migration and asylum policies of European Union, portrayed as new beginnings, are actually an attempt to deepen and legalize practices of human rights violations.

‘’Pact on Migration and Asylum emphasises solidarity as value on paper, but it is solely regarding solidarity between member states. Solidarity towards refugees and other migrants is not mentioned.  Return migration is a matter which Pact constantly mentions, i.e. return of the people even though their life and safety could still be in danger in the areas of return. Exactly in that segment Pact is contrary to the  1951 Refugee Convention’’ , pointed out Tea Vidović from Centre for Peace Studies (CMS) at the conference which was held today at European Square in Zagreb, standing before the banner that says ‘’Solidarity on paper, a foul play in reality’’. During couple last weeks similar warnings are coming from various experts, international organisations and networks like European Council on Refugees and Exiles and EuroMed Rights. All those organisations, including Centre for Peace Studies (CMS), have already drafted their proposals and petitions for solidary EU policy towards refugees, but the EU has evidently turned its head away.

For years countries like Greece, Italy, Malta, Spain and in last couple of years Croatia, are talking about the amount of pressure they have to deal with caused by measures established by Dublin Regulation. This Pact, instead of securing shared responsibility between member states, should by opening prescreening centres further burden states at EU’s external borders, while breaking international law at the same time.

As a result of aforementioned Antonia Pindulić from Centre for Peace Studies (CMS) warns: ‘’As is predicted by the Pact, these centres should provide approximate evaluation of potential success of pending petitions for international protection, regardless the details of individual cases, but mostly based on the country where the person is form, even though it is evident that basically none of the countries can be considered safe.  Breach is obvious as international law demands individual case evaluation as to not endanger the life of the people by returning them’’.

Jurisdiction, procedures, supervision and availability of support inside of those prescreening centres, which are basically penitentiary facilities, is completely unclear. Moreover by opening those centres legislature of the EU is directly derogated, as well as EU’s Directive which provides protection mechanisms for vulnerable groups, like unaccompanied minors, people with disabilities, older people, women during pregnancy, single parents, victims of human trafficking, seriously ill, people with mental health disabilities and persons who have been tortured, raped or exposed to long and severe periods of various forms of psychological, physical or sexual violence.

‘’Existing EU legislature ensures that specific needs of vulnerable groups will be taken into consideration during the acceptance, also it guarantees medical and psychological help and support for the victims of torture and other forms of violence. Establishing those prescreening centres opens and array of questions about how will rights and safety of these especially vulnerable migrant groups be protected and also who is in charge of that protection. Also question is does EU impose a principle that human suffering is worth differently depending on who suffers’’ warns Dragana Knežić from Stress and Trauma Rehabilitation Centre (RCT), organisation with 27 years of experience in supporting refugees and victims of torture.

Also, after multiannual petitions made by non-governmental organisations to introduce independent monitoring mechanisms over Police procedures in the asylum system, this Pact provides existence of monitoring system over the work of Police. But that mechanism is far from anticipated independence, as the body that should be monitored would be in charge of its establishment. Nominally, we could find ourselves in the situation that the Ministry of the Interior would be its own watch-dog, and be responsible for the monitoring of its own work and actions, without any independent mechanism With this Pact EU shows solidarity on paper, but behind that hides foul play and division.

Almost a month after the proposal of the Pact Croatian institutions still have not made a clear stance about problematic items included in the Pact. For too long Croatia consents to extortion by the EU as of the treatment of refugees and other migrants, as Croatia anticipates joining the Schengen Area. Croatia must not consent to the role of sorting-ground at the Westerns Balkans, that at its core violates human rights.