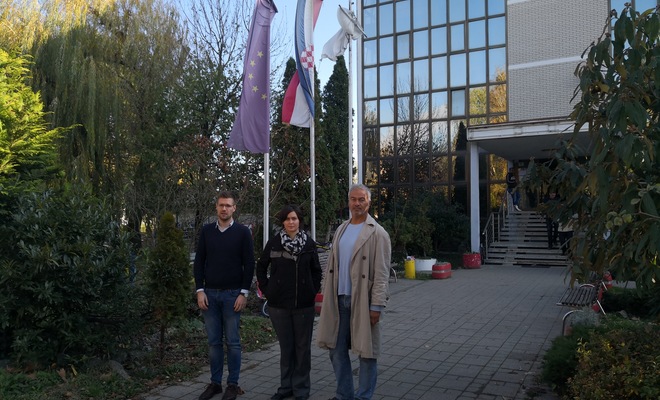 The Ministry of the Interior has denied Centre for Peace Studies (CPS) the access to Reception Centres for asylum seekers, refusing to extend the cooperation agreement to an organization that has provided support to refugees and asylum seekers for 15 years, warned representatives of the Centre for Peace Studies and Human Rights House at the press conference held on Monday 12 November, in front of the Reception Centre in Zagreb. MoI's deliberate explanation for such a decision is the alleged lack of physical space in which activities could be carried out, moreover claiming that there are enough other engaged organizations in the reception centres.

"We believe that this is a clear political decision to intimidate, marginalize and alienate organizations that publicly denounce refugees' difficulties, as well as illegal behaviours of police officers towards refugees", warned Julija Kranjec from CPS. She emphasized: "CPS since the very beginning has always been providing support to refugees and asylum seekers who live in reception centres, as information about the system of asylum, culture and society, conducting Croatian language courses and trying to facilitate the integration process. We ask the Ministry of Interior to reverse their decision, and sign the cooperation agreement with CPS, in order for the organization to have again the right to access the Reception Centres and continue to run the activities that are needed for asylum seekers.

In the last two years, CPS is one of the organizations that publicly condemns the restriction to access the asylum system for refugees, and the pushbacks, and together with the organization Are You Syrious? actively advocates for the prosecution of the responsible for Madina's death, which directly incriminates the Ministry of Interior, and it is currently before the European Court of Human Rights.

CPS warns that the Ministry of the Interior’s argument that there are currently sufficient activities being organized by other NGOs in Reception Centres is inadequate, as many activities are not available to all refugees, especially those in the reception centre in Kutina. Refugee needs were analysed for the development of the National Action Plan for Integration currently in force. Many organizations and institutions participated in the drafting of the National Action Plan, whose measures were not altered, and include measures for which CPS is co-responsible. Ironically, although this latest move of the MoI jeopardizes the implementation of the Action Plan, the Ministry of the Interior itself is responsible for the execution of some of the measures outlined in the Plan. This begs the question who benefits from this latest decision of the Ministry of the Interior, as it is not beneficial for Croatian society, institutions, nor the refugees themselves.

This was emphasized by CPS's volunteer of five years, Dag Orsic, who said: "We are frequently the first contact these people have with the society they have come to, they learn their first Croatian words with us and call us when they need information on how to get somewhere or to do something. People who come to us are all different and we have an individual approach with each of them, which makes every volunteer and every organization necessary and there must be room for all.”

By kicking CPS out of the reception centres, the MoI is attempting to break the asylum seeker’s contact with civil society organizations that will advocate for their rights when they are under threat. The CPS will not cease in bringing attention to those responsible for human rights violations, and calls on the Prime Minister to end the MoI’s punishment of those who condemn illegal police practices.