‘Kill the Serb’, ‘Put gays in camps’ – did you notice this slogans? 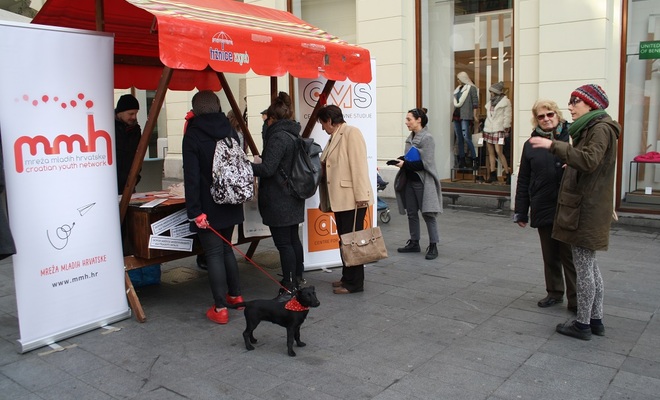 On the eve of the International Day against Fascism and Antisemitism (in the memory of the Crystal Night 1938) Croatian youth network (MMH) and Centre for Peace Studies (CMS) have organised a number of activities with their partner organizations from other cities.

“It is important to respond to the 'hate speech' or the incitement of hatred and violence against others. We can report it to the police or to the competent institutions (ombudspersons, utilities etc.), but also react in our personal circles - among acquaintances, family, friends, at work ... It's not about the censorship of such statements but the responsibility of each of us (as citizens) to react to the actions or speech which is directed to our fellow citizens and which is creating intolerant, insulting or humiliating environment for them, based on some of the their characteristics and often on national, ethnic or other affiliation to minority groups. All this is very important in times of arrival of refugees to Croatia, since they are also vulnerable groups, and we – as good hosts and fellow citizens - have the responsibility to wish them welcome”, said Cvijeta Senta from CMS.

Croatian Youth Network and Centre for Peace Studies are inviting citizens to report fascist characteristics in their city that they have noticed on their way to school or work. Image can be pasted on the wall of the events Facebook page, in order to make their contribution to a healthier, more tolerant and a cleaner environment.

"Despite the election silence, we should never be silent about hate speech and fascism! In fact, every time when we are ignoring it or when we pretend that it does not exist, we tacitly approve it. So today, on the day of election silence, we are celebrating antifascism, for which we think that it should never be questioned as one of the fundamental values of this society”, said Marin Živković (MMH).

The educational walk in Zagreb was also organized: it started at the Victims of Fascism Square (in the immediate vicinity of the former headquarters of the Ustasha Surveillance Service as well as the prison where numerous prominent anti-fascists were held). The walk was led by curator Petra Braun, and it ended in the Street of Prague (the street where the Zagreb synagogue was standing until the Second World War).