Backlash on the Freedom of Speech 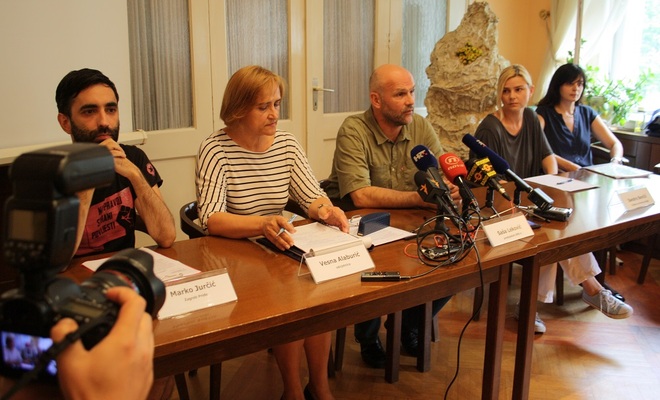 After the Osijek County Court recently ruled that with its newspaper article "Homophobe and Homofriend 2013" the Zagreb Pride association had harmed the dignity, honour and reputation of journalist Karolina Vidovic Kristo, Zagreb Pride said on Monday that the ruling restricted freedom of speech and censored its work.

"The Constitution guarantees us the freedom of speech, and Zagreb Pride's mission is to publicly reveal homophobia, so our basic duty is to react every time we see someone acting against homosexuals," Zagreb Pride representative Marko Jurcic told a news conference in the offices of the Croatian Journalists Association, calling on citizens to support the association and freedom of expression.

Under the court ruling, Zagreb Pride is to pay Vidovic Kristo 30,000 kuna plus default interest and litigation costs.

Jurcic said that the association still had the possibility for a review of the ruling and continuation of the legal battle before the Constitutional Court and the European Court of Human Rights.

Lawyer Vesna Alaburic said that advocates of conservative and liberal political options had the right to express their views, but underlined that there were also limits to freedom of expression because judgements by the European Court of Human Rights and the European Parliament's resolution on the fight against homophobia stated that expressions of any intolerance towards LGBT persons based on prejudices constituted homophobia, which is equal to racism and anti-Semitism.

Speaking about the case involving Vidovic Kristo and Zagreb Pride, Alaburic said that the good thing about it was that until recently there had been people who would publicly brag about being homophobes and that now Vidovic Kristo had shown that being a homophobe was something that harmed one's dignity, honour and reputation.

Sandra Bencic of the Centre for Peace Studies believes that the main purpose of complaints against activist organisations that fight for equality is to equalise the legitimate fight for the equality of a social group and the fight against equality.

"That is very problematic because we have had such an equalising in the past 25 years and yet we are surprised when it hits us back in the head in the form of a swastika symbol on the pitch of Poljud Stadium (in Split)," said Bencic.