The clock moved forward an hour this weekend, while Croatia moves backwards 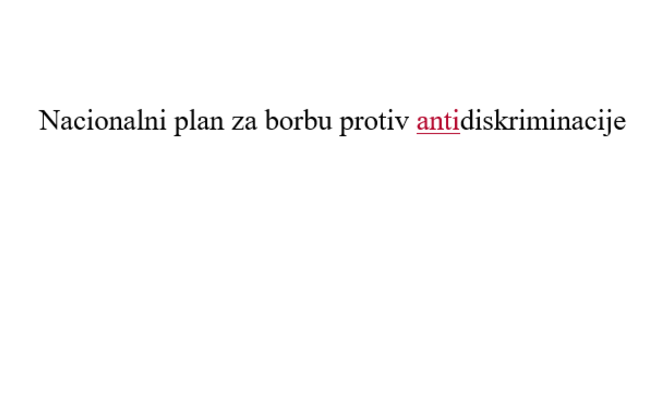 Today the Center for Peace Studies and Human Rights House Zagreb sent an open letter to Prime Minister Plenković warning of the degradation of the National Plan to Combat Discrimination from 2017 to 2022. Below is the full text of the letter.

Today begins the work of the Working Group for the development of the National Plan for Combatting Discrimination from 2017 to 2022, yet the draft of the National Plan which is the basis of their work is, in our opinion, extremely regressive and dangerous. This is yet another in a series of steps taken by this government which prevents a significant share of the population from enjoying a dignified life of equal participation in social, cultural, political and economic life. We primarily communicate to the citizens of Croatia, who we consider the most important carriers of the sustainable change this country urgently requires; however we also appeal to the Prime Minister's Office because it is vital that government institutions do not obstruct or impede social progress. As the head of the Government, whom citizens have entrusted with stewardship of the Republic of Croatia, we request responses to the following questions:

1. How and for what reasons did the government decide that after three rounds of positive pronouncements by public bodies as well as the completion of public debate, to withdraw from the adoption of the draft National Plan which was developed by the previous Working Group who invested almost two years of their time and expertise, and into which public finances were invested? Why has one-third of the draft National Plan, or more than thirty measures contributing to the inclusion of marginalized social groups and social cohesion, been removed without explanation?

2. For what reasons was the development of a system of support to pupils and students who are victims of discrimination and bullying removed from the National Plan? For what reason is the Government unable to secure activities for children who do not attend elective religious classes in elementary school for the time between the first and last hour of lessons? Why is the Government against the removal from public school textbooks of content that is discriminatory stereotypes? Do you consider that discrimination is the message that children should take away from school?

3. For what reasons have all mention of discrimination against lesbian, gay, bisexual and transgender people been erased from the National Plan, despite the fact that research and public cases have shown this to be one of the groups most affected by discrimination in Croatia? Has the Government, under your leadership, decided not to fully apply the European Anti-discrimination Directives to which it has obligated itself to apply? Is the government of the Republic of Croatia turning its back on the European Union, only three days after signing the Rome Declaration?

4. Does the government of the Republic of Croatia truly believe that the public health care system should not be available and accessible to all citizens equally? Why have measures protecting the reproductive and sexual rights of women in Croatia been removed from the National Plan? Is the Government trying to tell us that the advancements of medicine in the 20th century are now out of our reach?  The clock moved forward an hour this weekend, but these decisions by your government could move Croatia back decades.

5. Why has the government decided to eliminate the education and training of judges, judicials and other public officials in the field of combatting discrimination and hate crimes, in a country where there is widespread consensus that the poor functioning of public administration and the judiciary are key issues? Why do you think that information on the number of hate crimes should not be publicly available and accessible?

6. How long will you allow a narrowly-based interest group of radical ultra-conservative organizations and politicians to usurp government institutions in a society where the vast majority of the population does not support discrimination and hatred?

Finally, we would like to remind you that the policy of national unity to which you prescribe cannot be implemented by excluding a large group of citizens – members of national minorities, the young, people with disabilities, lesbian, gay, bisexual and transgender people, women, the elderly and others. This is not an expression of patriotism, nor does it is behaviour in accordance with our national interests – indeed, it is the opposite.  Hence, we demand that the Government develop a National Plan to Combat Discrimination which will in fact combat discrimination, not ignore it.