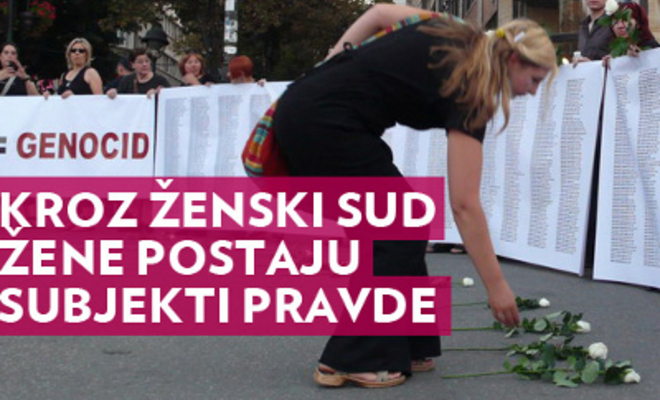 ”I am a heroine!” said one of the younger women who testified. She had survived a long period of sexual violence, rape and torture as a teenager in one of the rape camps, a more or less forceful and violent marriage, divorce and a new beginning. ”They took most of my childhood. They took my youth. But the present, and the future are mine.”

Last weekend, May 7-10, Women’s Court in Sarajevo gathered some 500 women from Bosnia and Herzegovina, Kosovo, Macedonia, Montenegro, Slovenija and Serbia, to testify and listen to witnesses and their personal life-stories about what happened during the Balkan wars in the 90s and thereafter – and how that affected, and still affects, women’s lives today.

The most powerful thing about the Court was that the women survivors and their testimonies were at the centre. They were made subjects, taking power of the space and of their own stories. The rest of us could only listen, and give our solidarity and standing ovations to their courage.

The process leading up to the Court has taken several years. One woman said: ”In the end I had to pick sides, I became part of us and them.” But there were also many stories of resistance and humanity, of neighbours helping each other in spite of personal risks, of strangers helping people they had never met before.

After each group of witnesses had spoken, a few so called expert witnesses – academics, activists and others, shared an analysis of the background, structures of war and of what happened, that gave a frame to the individual stories. For instance, it becomes obvious how gender structures were cemented. Almost none of the men in the women’s stories survived. The children and their survival (and physical and mental health) became the responsibility of the women – either because women and men were separated, or becuase women took that responsibility upon themselves.

The impunity is also widespread. Several women testified about perpetrators still being free – walking the streets of their home towns, or even holding political positions.