AMNESTY INTERNATIONAL, HUMAN RIGHTS WATCH AND CENTER FOR PEACE STUDIES: Violation of human rights is a line we cannot cross! 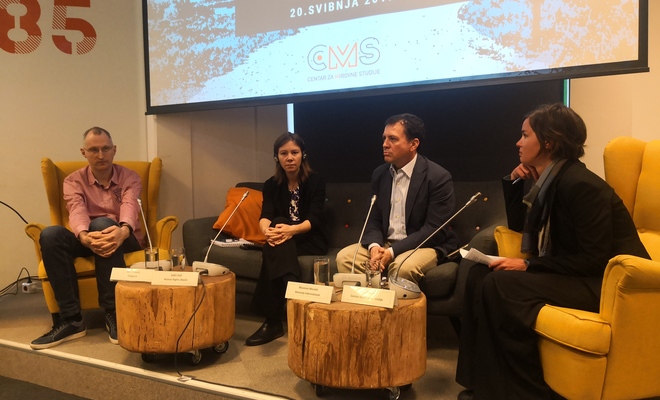 Migration, although one of the key topics for the European Union, was not adequately represented in the pre-election campaign in Croatia. That is why the Center for Peace Studies, ahead of the EU Parliament elections, decided to organize the panel discussion Europe and Migration: Where do we draw the line?. Centre for Peace Studies invited representatives of Amnesty International and Human Rights Watch, who today, on May 20th in Zagreb, presented their insights on the relations of the EU member states towards migration.

Since 2015, when a large number of refugees came to the EU, migration has become a dividing topic wrapped in false dilemma - human rights vs. safety. Because of the complexity and many layers of this topic, the way in which it will be approached, what policies and practices will be conceived and conducted, will serve as the mirror of the European Union.

The Center for Peace Studies also invited the representatives of the candidate lists from the Republic of Croatia for the upcoming European Parliament elections, and published the demands for the future members of the European Parliament, concerning the migration issues.

Croatia is trying to show how it is ready to meet the conditions for entry into Schengen, but pushbacks and violence on the borders show how unprepared Croatia is for that entry, said Julija Kranjec from the Center for Peace Studies. Kranjec added that Croatia's MPs in the European Parliament are expected to oppose the violence and illegal acts at the borders of the EU countries, and to advocate for thorough investigations, discontinuation of misuse and partial interpretation of Croatian and European legislation,  cessation of criminalization of solidarity, and the development of active inclusion measures of newcomers to society.

Lydia Gall, from Human Rights Watch, explained that Hungary has managed to bring down the number of entries to a very small one,  through its repressive policies and practices, and even for those who succeed in entering the Hungarian system of international protection, the conditions of life are made really difficult. She pointed out that the practice we now see at Croatian borders has been present for years at Bulgarian, Polish and Hungarian borders, and how the Hungarian closure of the borders forced people into being „stuck” in Serbia and Bosnia and Herzegovina and directed them towards Croatia.

Amnesty International has interviewed 94 people in Bosnia and Herzegovina, all of whom have been pushed back to Croatia at least once and a third of them faced direct violence. Massimo Moratti, deputy director of Amnesty International's European office, has been following the situation on the Balkan route for a long time, particularly in the Una-Sana Canton, and he claims that the asylum system in Bosnia and Herzegovina doesn't function and people do not intend to stay there. He also emphasized that pushbacks are often happening in chained motion, from Italy, across Slovenia and Croatia, to Bosnia and Herzegovina. What is actually happening is the externalization of migration, by which Member States transfer their responsibility to non-EU countries.

The conclusion of the panel was that there needs to be a brave policy with a vision that is proactive in opening up possibilities for refugees who are coming due to wars, climate change, and poverty. It is important that this policy is further developing the rights and stopping the erosion of the asylum system and the lowering of the human rights standards.