CPS and Welcome Initiative: "We ask for humanity, not torture! We ask for investigations, not denial!" 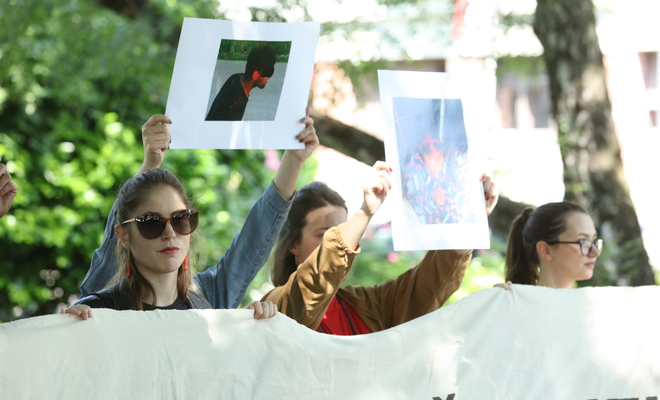 This morning, Centre for Peace Studies and the Welcome! Initiative organized a street action in front of the Ministry of Interior (MoI) building. Activists requested to the responsible institution to initiate effective investigations, instead of denying violence against refugees.

The street action took place two weeks after photos showing the physical marking of refugees with orange spray all over their heads were published, which the refugees testified were committed by Croatian police during inhumane pushback from Croatia. Due to the inadequate reaction of the Ministry of the Interior, the Centre for Peace Studies and the Welcome! Initiative stated that it is necessary to show humanity to people in need and that the Ministry of the Interior should take responsibility and conduct effective and quality internal investigations, but also not to hinder independent investigations.

"After the inadequate response of the Ministry of the Interior, last week we sent an additional inquiry about the inhumane and illegal treatment of refugees. We have not yet received a response, but we expect the Ministry of the Interior to present the results of effective internal investigations, instead of desperate efforts to discredit the work of media and organizations reporting on the cruelty perpetrated on refugees", said Sara Kekuš from the Centre for Peace Studies.

In the last four years, we have seen thousands of testimonies, photographs and recordings, including police officers' confirmations - and no effective investigations. We also witnessed warnings from independent institutions such as the Ombudsman that had been denied access to MoI data on the treatment of refugees and other migrants.

We also point out that, according to the case-law of the European Court of Human Rights, the state must conduct effective official investigations into all allegations of torture or any other cruel, inhuman or degrading treatment. The repeated absence of a legally prescribed investigation could once again indicate that this is about political decisions and systematic violence.

Given the fact that on several occasions, police officers warned of systematic illegal practices carried out by the Croatian police, activists call on police officers who care about the protection of human lives to refuse to carry out illegal orders and report such orders' to protect their rights and the rights of their colleagues.

Police Affairs and Powers Act itself stipulates that a police officer must refuse to execute an order or instruction for which it is obvious that they are committing a criminal offence and report it to the competent authorities.

"It is up to all of us to show humanity, prevent further torture and violence, and to demand investigations from the institutions, instead of repeated denial" the activists concluded.