We call for humane, sustainable solutions and clear distribution of responsibilities within the EU member states 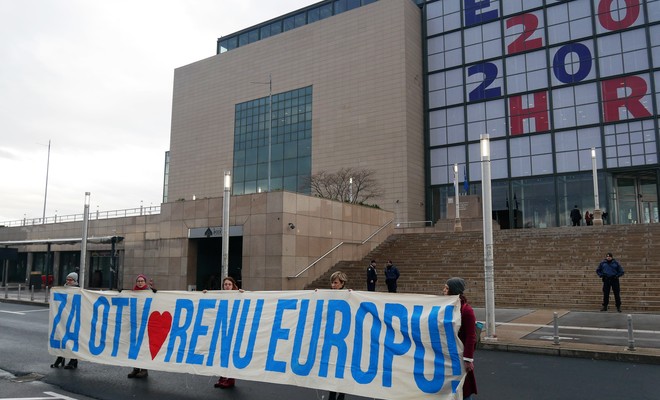 Ahead of the informal meeting of European Foreign Affairs Ministers, Centre for Peace Studies, Are You Syrious, Welcome Initiative and Forum 2020 warned that the EU has to urgently adopt sustainable and humane solutions for the humanitarian crisis at the Greece-Turkey land border, as well as on Greek islands and other external borders of the EU. A banner with the message “For Open Europe” was displayed at the press conference.

Kristijan Kovačić from the civil society organisation CROSOL has, on behalf of the Forum 2020 – informal platform of civil society organisations gathered around the Croatian presidency of the Council of the EU, pointed out that Forum 2020 advocates policies of interest to Croatian and EU citizens, with emphasis on the protection of human rights, rule of law, sustainable development and strengthening EU's role as a global actor. “Decisions which will be made on today's meeting will influence the future of Europe and, therefore, they have to be in line with its fundamental values”, said Kovačić.

Recently we have witnessed statements by high-ranking EU officials, which aim to undermine the rule of law, and the idea of sending military against civilians at EU's external borders is especially troublesome.

“We are currently witnessing a political war between Turkey and the EU in which both sides use people instead of bullets. The President of the European Commission Ursula von der Leyen has stated that Greece has to be Europe’s “shield”. This support by European politicians towards countries such as Greece and Croatia, which are expected to do the dirty work of protecting European borders - at the cost of human lives if necessary, is disturbing and hypocritical. We in Croatia know that the policy of violent pushbacks and disabling access to the asylum system is unsustainable in the long term. When they have nowhere to go back to, it is only logical that people will go forward”, said Tajana Tadić from Are You Syrious association.

A legal and constructive European response to the crisis, warns Tajana Tadić, should include a fair distribution of responsibilities towards asylum seekers within all member states, as opposed to the abolition of human rights and continuation of political bargaining with despots such as Erdoğan.

“Weapons are not and cannot be the answer to cries for help”, stated Sara Kekuš from Centre for Peace Studies and added “Europe mustn’t send military against people fleeing war and conflict”. She pointed out that the Croatian government has to put the reform of the Common European Asylum System (CEAS) on the agenda within the EU Council. The reform of CEAS has to include provision of adequate protection and respect of the non-refoulement principle, in-depth reappraisal of the Dublin Regulation with permanent distribution of responsibility, implementation of measures for sanctioning those member states which violate human rights and refuse to participate in the distribution of responsibility, as well as securing resources for integration instead of continued investment in militarization of the borders and deportations of people.

While we are witnessing the suspension of human rights on a daily basis, escalation of inhumane treatment, and extinguished human lives, we can only assume what is happening in those places where media have no access, the non-governmental organisations are warning. The EU needs to remember the foundation on which it was built. Solidarity with Greece has to mean solidarity with the people in search of safety and solidarity with the local population by ensuring urgent reception and protection of people in other member states, as well as a long-term investment in sustainable and progressive solutions based on respect for human rights. The Croatian presidency of the Council of the EU is an ideal opportunity to address this issue in a responsible and constructive manner.