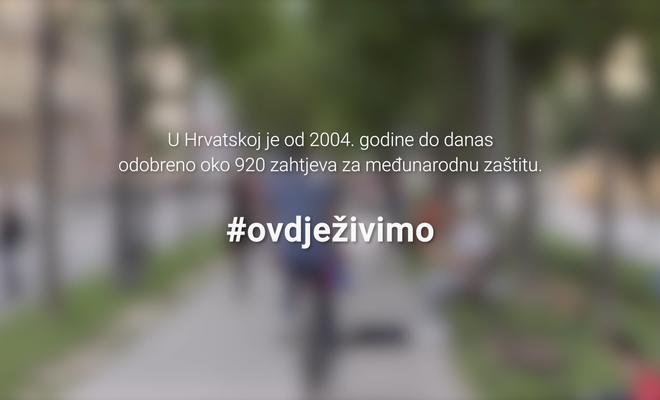 The Centre for Peace Studies (CMS) has launched a campaign called #ovdježivimo (#welivehere) within Refugee Weeks in Croatia to share the stories of refugees who have found their new home in Croatia about their integration in the new environment.

In short videos, refugees from Iran, Turkey, Pakistan and Congo speak about their life in Croatia, what they do and what they consider important. In this way, Croatian citizens can get to know their new neighbours who have been granted international protection, who live and work here, make friends and try to make their wishes and dreams come true.

According to data from the UN refugee agency UNHCR, 79.5 million people worldwide were displaced from their homes at the end of 2019, of whom 40 percent were children. Although the number of people in need of security is growing, both the European Union and Croatia approved fewer refugee protections than the previous year as fewer than 300,000 people were granted protection in the EU and as few as 158 in Croatia.

Refugees seeking protection in Croatia, in theory, are guaranteed a host of rights under Croatian and international law, but in practice, they encounter many institutional barriers as well as discrimination when they try to exercise these rights. This campaign shows that we have so much in common, and stresses out the importance of connecting the local community and the newcomers.

This action is funded by the European Union’s Asylum, Migration and Integration Fund.The content of this campaign represents the views of the authors only and is their sole responsibility. The European Commission does not accept any responsibility for use that may be made of the information it contains.