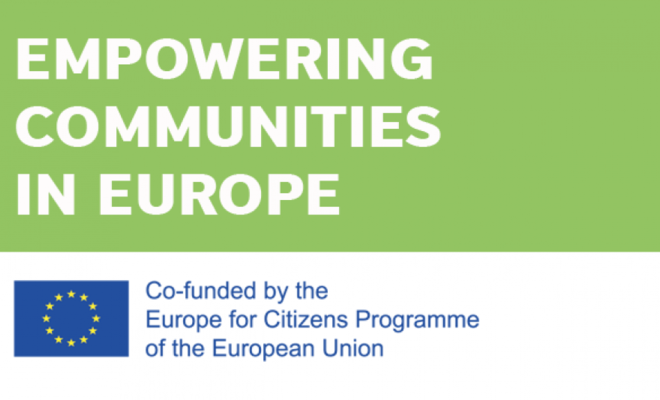 WHAT IS EMPOWERING COMMUNITIES IN EUROPE?

Empowering Communities in Europe is an international project co-funded by the European Commission. The project was led by the British Council in Poland and delivered together with civil society organisations in Poland, Romania, Hungary, Croatia, Bulgaria, Czech Republic and Slovakia.

Participating organisations have been self-selected based on their commitment to support migrant integration, community development and promoting evidence–based policy making in the area of migration.

Empowering Communities in Europe project was delivered between 2 January 2017 to 29 June 2018.

WHAT DID EMPOWERING COMMUNITIES IN EUROPE AIM TO ACHIEVE?

Empowering Communities in Europe project arose from identification of the dangers of growing xenophobia, intolerance and discrimination in Europe.

Empowering Communities in Europe project aimed to deconstruct the process of migrants’ stigmatisation and to foster intercultural dialogue and mutual understanding. The project involved selected communities and trained local leaders to overcome stereotypes and develop counter narratives for more accurate perceptions of migrants and refugees arriving to Central Europe.

WHO WAS EMPOWERING COMMUNITIES IN EUROPE FOR?

Empowering Communities in Europe was designed for the most affected communities in seven countries. It involved communities’ representatives - young activists, potential and emerging leaders (including third party nationals legally residing in the participating countries) – and wider community members.

HOW WAS THE PROJECT DELIVERED?

Empowering Communities in Europe was jointly delivered by the British Council in Poland and local civil society partners in all participating countries.

The project was delivered in four stages:

I. Give Me Voice Research

In this phase it was assessed how hate speech and propaganda arise on fertile ground of economic and security fears in selected communities, and how they contribute to radicalised behaviours both from the settled communities and new arrivals.

II. Be The Change Workshops

Representatives of the most affected communities were trained through a series of Be the Change workshops when they gained facilitation skills and adapted content to conduct workshops in their communities through social action.

Trained representatives disseminated their learning through social action in their communities.

The final stage of the project was the Exit/Entrance Conference which strengthened the foundations for continued intercultural dialogue and continuous increase of mutual understanding. The legacy of the project is an international, pan-European network of young activists, potential and emerging leaders in their organisations, communities, municipalities, with ambitions to actively combat stigmatisation of "immigrants" and build counter narratives to foster intercultural dialogue and mutual understanding. It provided tools like Exit/Entrance Report, to continue beyond the life of the project, and to connect to a wider international community.

EMPOWERING COMMUNITIES IN EUROPE (ECE) PROJECT HAS BEEN FUNDED WITH SUPPORT FROM THE EUROPEAN COMMISSION. THESE PUBLICATIONS REFLECT THE VIEWS ONLY OF THE AUTHOR, AND THE COMMISSION CANNOT BE HELD RESPONSIBLE FOR ANY USE WHICH MAY BE MADE OF THE INFORMATION CONTAINED THEREIN.